I love it when we can help someone out in a pinch.  That’s why we have the emergency services line.  (215) 743-2200.  Kind of like the Bat phone for scaffolding.  I’d like to think that our very own Bob Sarkisian is Batman (in a way).  But really, the only time he’s like the caped crusader is when he’s climbing the side of a building in one of his swing stages or answering the Bat phone, like this case.

We say it – and we mean it.  We will have crews on-site within 24 hours and the problem solved or at least in motion shortly thereafter.  We really do have the fastest response teams in the industry.  And I’m not just saying that because Batman (Sarkisian) and his trusty partner Robin (Shawn MacDonald) have me squeezed tighter than Anita Bryant and some Florida orange juice.  But it’s true.  In reality, it’s mostly MacDonald who acts more like Batman on these emergency service calls.  I guess trusty sidekicks are always quick to slip into their leader’s shoes when they aren’t around.  But I digress… 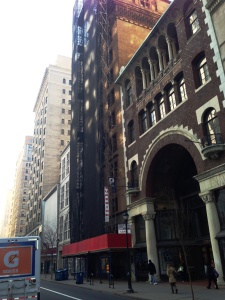 The guys over at 13th and Chestnut needed to get to the top elevation for some cornice repairs and reconstruction.  And they needed to get up “air” fast.  The job was put into overdrive.  From the time Batman (Sarkisian) at Superior Scaffold took the call – all the way through design, engineered drawings, approval, and erection it took only 7 days.   We even added containment netting too.

Yes, another satisfied customer.  So when you need something in an emergency situation – don’t turn on the Bat signal (Sarkisian or McDonald will never see it – too busy analyzing what effect Bat guano has on steel cross braces) make the call to Superior Scaffold’s emergency service line (215) 743-2200.  You won’t be disappointed.

More pics to come, as the job continues.