Superior Scaffold was one of the contractors included in the Preservation Alliance Grand Jury award for the renovation of Independence Hall in Philadelphia, PA!

The prestigious award is given those companies and contractors that meet strict criteria set forth by the Preservation Alliance for a greater Philadelphia.  Their mission is to actively promote the appreciation, protection, and appropriate use and development of the Philadelphia region’s historic buildings, communities and landscapes. 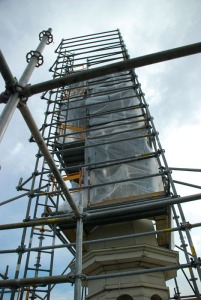 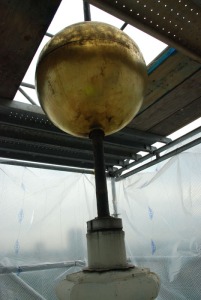 The award is the culmination of work by many companies and workers who did more than just another job on this tower.  They helped preserve a piece of american history.  Everyone involved did a great job and should be proud of the role they played in the restoration process.

And boy does she look great.  As you all know by now Superior Scaffold got the opportunity of a lifetime to provide the system scaffold and scrim on the historic structure.  And now she’s ready for her close up.  I did notice a few spots that are waiting for some custom carpentry but for the most part she is back to her former glory.

I won’t bore you with details – just have a look. 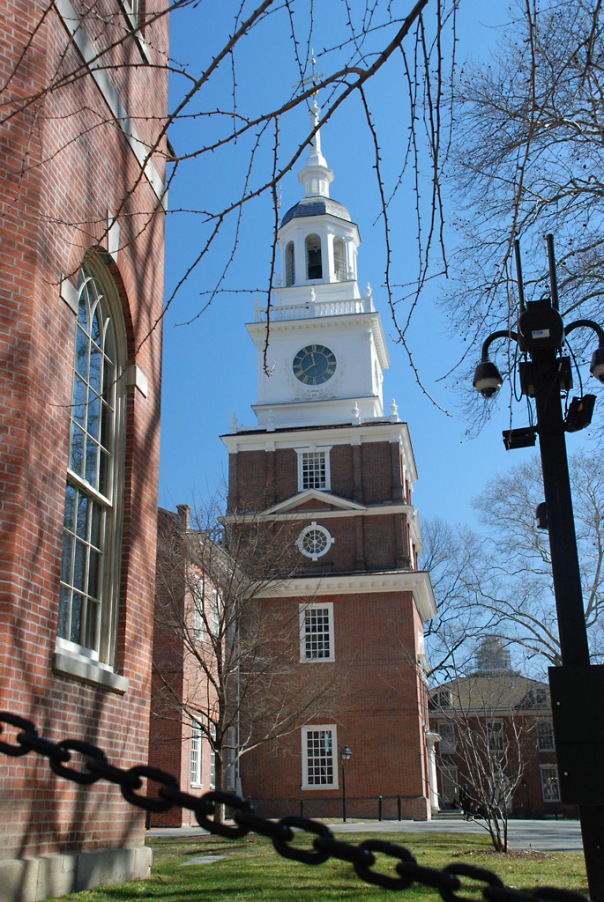 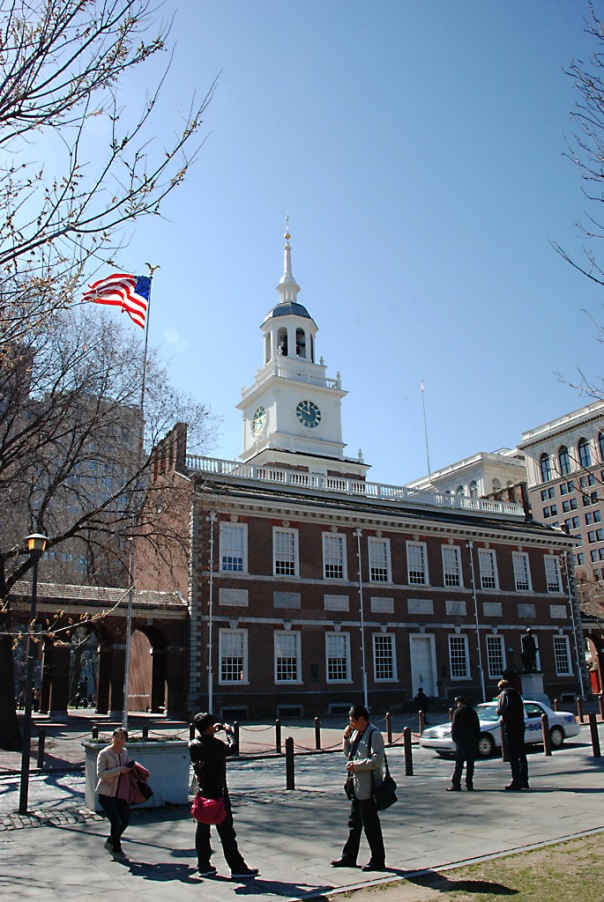 Congratulations to everyone involved with the Independence Hall renovation.  She looks great!

Well, things are surely coming along at the Independence Hall Tower.  Crews have really done a terrific job getting the spire repainted, the ball and weather vane re-guilded, the roof flashing in place.  It’s looks great.  They have even taken most of the decorative urns down to have them repainted as well.   I saw it with my own eyes.  It’s been a good 6 months since I was last up on the scaffold.  I do have photos and will post them up tomorrow.   We got to see inside the bell housing as well.  They have put new metal flashing down in there as well and completely repainted the surrounding bell housing.  This new refurb should last another 100 years.  It’s pretty cool to see how the tower is taking shape as they move down further towards the ground and take down the decorative scrim.  We did notice that they are getting the gold colors in the clock faces as well.  Just a quick entry here but I will post more details when I get the photos up.

Getting Press for our company Part 4 – Success story #2 – The Cover of Access Lift & Handlers Magazine.

It’s crazy just how the world works sometime.  We had just gotten our stuff to Vince at Scaffold Industry Magazine and the article hadn’t even come out yet when someone in our office remembered being contacted by Lindsey Anderson over at  Access Lift & Handlers Magazine (part of KHL group).  Again, we turned her name over the Erik who told her about the work we were doing over at Independence Hall.  She was excited when she saw the images.  She even thought that we would get the cover shot of the magazine.  Yeah!

So, we went back to the press release and tweaked it a bit so it wasn’t the exact same as the one we sent to scaffold magazine.  By the way, I did inform her that we had already had an article coming out in the other periodical – it’s just good business to be honest about where you stuff is being seen.  She assured us that there were no worries.  We went back and forth a few times as Lindsey prepared the article and layout… She was very cool and professional throughout the entire process.  And a few weeks later… Bam. 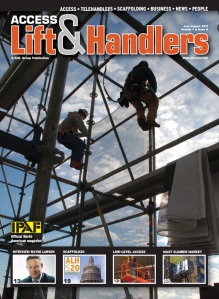 The article inside was great and we had accomplished our goal.

See the article inside – here.

A giant shout out to both Lindsey over and Access Lift & Handlers Magazine, and Vince at Scaffold Industry Magazine for the work they did on the Independence Hall project.

We thought that this worked so well that we are now making this part of our over-all marketing strategy.

How we got Press for our Company – Part 3 (Success)

Everyone will tell you, that in business you need a bit of luck once in a while – and this was no different.  We had everything together and ready to go but who would we get it to?

And as bit of luck would have it, while going through our contacts, we remembered an email we had gotten from Vince Brennan, the editor at Scaffold Industry Magazine a few months prior, asking what we had going on.  Bam.  We gave Erik Highland, our photographer and marketing guy,  Vince’s name and number and said – “have it him.”,  which he obviously did, because a week later we were answering a list of questions he had prepared for us about our roll in the Independence Hall renovation.  Erik sent him some of the photographs (with and without the scrim) and Vince thought they might even be good enough to garner the cover shot!  How cool would that be?    We were all very excited about this opportunity.

For several weeks we went back and forth with the photographs and text that Vince had written for the article.  It was a terrific story and the photographs really helped accentuate the work we had done.

We crossed our fingers that our scaffold and scrim project would make it onto the cover of one of the biggest magazines in our industry.  But as fate would have it – we lost out to a man wearing a safety harness.  The issue was all about safety so they went with a logical choice.  But Vince did an awesome job with the article!  Superior Scaffold from Philadelphia got a 4 page spread on the inside of the magazine. 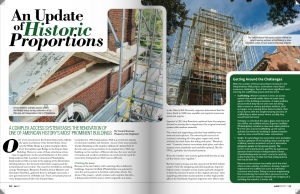 It worked.  Our small idea about documenting the job we did and then finding an angle for the story paid off.

And that wasn’t the end.  There was more to come!

Okay – we’ve made our plan.  We’ve picked the project that would be great for all of America to talk about (the renovation of Independence Hall) and we’ve gotten some fantastic photos of both phases of the job site.

How do we get press for the scaffold work we’ve done?   We started by compiling a list of contacts that we have had over the years.  Some are still valid and some are not – but we look at them as possible leads to run a story on us.  While we are culling through our possible contacts we write a press release detailing our role in the renovation process.  Since we were not the general contractor (GC) but the scaffold company, we have a slightly different role in the process (mainly designing, renting, transporting and erecting the scaffolding).

So we come up with our angle on the story.  Every press release needs an angle.  Since the major papers in the area have all done a generic story on the renovation of the beloved landmark we need something new, something fresh that will still tie into the overall renovation project.

We find it in the decorative scrim that was added to our scaffolding.  That’s a cool story because, not only does the scrim add a great look to building while renovations are taking place but the structural engineering changes that had to be made to accommodate it were pretty significant.  So we detailed the equipment, the procedures and even include a few quotes from the engineers and the CEO of the company – and boom.  We are ready to get it out to the public.

For the correct format of writing a press release and/or what to include you can google or hit any of the search engines “How to write a good press release” and you’ll get plenty of guidance.

We knew that we wanted to be placed in some of the industry magazines so that’s where we focused.

Superior Scaffold is wrapping up it’s role in the renovation of Independence Hall. Here are some shots of the guys installing the scrim. These amazing photos were taken by erik at highfilms.com. Get a more in-depth look at the project including pictures and details at  Superior Scaffold.com. The top section is coming down now revealing the […]